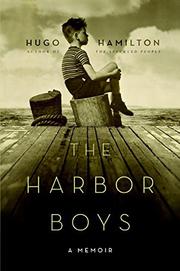 Coming of age in the 1960s, the author struggles with the post–World War II angst of his German mother, the stern regimen of an Irish patriot father and the violent troubles that rend Ireland.

Hamilton’s initial burden, he recalls from this particular summer in his early teens, is the need to escape the stigma of having a German mother. Routinely hailed as “the Nazi” by local boys, he tries to fit in by somehow cloaking his identity—he’s always on the run, he recalls, “like Eichmann in Argentina.” There is no respite at home, ruled by a father who, despite his own English ethnicity, is obsessed with the loss of Irish identity under British repression, plus ongoing troubles in the North, and insists that only Gaelic be spoken by the family in the house. This, of course, precludes such things as listening to John Lennon. The author’s ultimate escape becomes the harbor where, with his friend and mentor Packer, he picks up summer work helping out Dan Turley, a tough old man who rents skiffs to tourists and goes out fishing in his own open boat. At the harbor, he feels, everyone has a new identity: “It’s goodbye to the killing news on the radio, goodbye to funerals and goodbye to crying. It’s goodbye to flags and countries.” But Turley is a Protestant, originally from the North; he has local enemies, in particular a Catholic fisherman named Tyrone. Their ongoing feud draws in Hamilton and Packer, who scheme ways to prove it is Tyrone who is cutting loose and vandalizing Turley’s boats. The somewhat mysterious drowning of Tyrone, whose body washes up from the sea, puts an end to the affair but brings the author a revelation of having finally “won” his own innocence by, essentially, growing up.

Superbly written and nuanced narrative in which Hamilton’s experiences coalesce to overcome a burden of unjustified guilt.