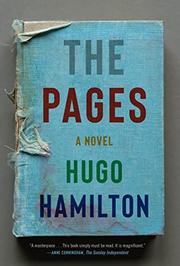 A well-known novel comes to life.

Rescued from a Nazi book burning in Berlin in 1933, a copy of Joseph Roth’s novel Rebellion—the tragic story of a German soldier who becomes a barrel organ player upon returning to Germany missing one leg after World War I—serves as the unusual narrator of Hamilton’s novel. Nearly a century after the book’s publication, Lena Knecht, an artist living in New York City whose grandfather received the volume from the professor who saved it from the flames, returns to Germany with the book in hand hoping to discover the significance of a cryptic map sketched by its original owner on one of its blank pages. Hamilton's artful story teems with subplots that include the account of Roth’s disastrous marriage to Friederike Reichel, a union destroyed by her mental illness and his alcoholism; Lena’s relationship with Armin Schneider, a young Chechen refugee who returns the book to her when it’s stolen shortly after her arrival in Germany and then joins her search; and Armin's sister Madina, who lost her leg in a bombing in Chechnya and is stalked by her dangerous former lover, a violent right-wing nationalist. There are disturbing parallels between the world of Roth’s novel, published in 1924 as the Weimar Republic began to slide toward the Third Reich, and contemporary Europe, where the growing presence of immigrants like Armin and Madina sparks fear and distrust. The novel neatly balances these realistic storylines with fanciful images described in Rebellion’s distinctive, appealing voice, as when the book refers to its “two years on the shelf right next to a small book on insects,” recalling how it was “the happiest time of my life, living with all that buzzing, like a constant summer.” Lena eventually solves the map mystery, bringing the story full circle to an emotionally satisfying conclusion.

A haunting story that provides a welcome reminder of the enduring lives of books.