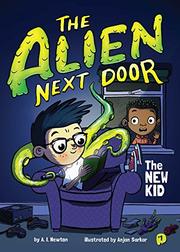 From the Alien Next Door series, volume 1

Second-grader Harris Walker’s sure something’s odd about the new kid at school, whose family has just moved in next door.

Harris has seen Zeke do impossible things, but no one else has. Meanwhile, Zeke, or Zekelabraxis, is unhappy to be starting over in a new school on a new planet. Due to his scientist parents’ research, the family moves around a lot, and Zeke misses everything about his home, Tragas. It’s hard making friends while hiding your true self. Harris’ best friend, Roxy Martinez, feels sorry for Zeke and includes him when she can, urging Harris to do the same. After a successful play day at Harris’ house, Harris is ready to be friends with Zeke…but not ready to give up trying to prove Zeke’s not of this world. Newton’s first in a series of easy chapter books is largely occupied by setup, simply establishing characters and relationships with very little plot. Mild humor is found in Zeke’s attempts to conceal his true nature, but the alternating third-person focus between Harris and Zeke blunts much of its potential. Human diversity is signaled (Harris may be black; Roxy is evidently Latina) but not explored; in his human form, Zeke appears to be white, though he’s actually fairly squidlike. Sarkar’s cartoon illustrations on every page pair well enough with the text. (Final art not seen.)

This series spin on the alien-next-door trope gets off to a slow start.