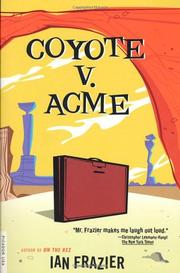 Fresh from a memoir cum family history (Family, 1994), the author returns to the antic form with which he first made his name. Here is a gathering of his funny stuff culled from the pages of the Atlantic Monthly, the New Yorker and, no kidding, Army Man. Though the collection is not seamless, the 22 short sketches harbor some truly loony stuff. Founded on vaguely recognizable facets of modern American life, Frazier's pieces use to wonderful effect the babble of banking and finance, the cant of showbiz, and with particular style, the language of literature. There's an alternate view of Wuthering Heights (in which ``Cathy died, but not seriously''). There's a short story overflowing with meaningful relationships. (``Now that I am grown, with a husband and a wife and children of my own . . .'' muses the narrator). There's Boswell's life of Don Johnson. And there is a wickedly accurate parody of Bob Hope's golfing reminiscences. Frazier has perfect pitch for language, whether it's litigious, as in the case of Wile E. Coyote v. Acme Company or instructive, as in the tax directive wherein some actual IRS wordage is embedded. Theatrical shtick isn't scanted, either, in a Studs Turkel-ish interview in which a fatuous Comrade Stalin is recalled expounding on the art and practice of stand-up comedy. In his S.J. Perelmanic vein, Frazier is likely to do a send-up on a news item of signal silliness. Though not all the little pieces are of equal quality (one riff that doesn't quite work is a commencement lecture from a scholar possessed by demons), they are all worth reading. And in the time it takes to read the average book just once, this text can be read over and over again—which is not such a bad idea.