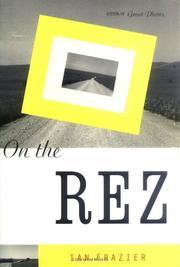 Humorist and chronicler Frazier (Coyote v. Acme, 1996, etc.) returns to Indian country for an astute, personal, and disarmingly frank assessment of life and conflict among the Oglala Sioux on South Dakota’s Pine Ridge Reservation. Reintroducing a figure from Great Plains (1989)—Le War Lance, with whom the author has been friends for 20 years—Frazier explores his own affinity for the Sioux by relating the curious twists and turns of their friendship. A raconteur of the first rank as well as an alcoholic, Le has roamed from Hollywood to upper Manhattan, but is finally back home on the rez. Since Frazier’s own wanderlust has brought him and his family to Missoula, Montana, he often goes to visit Le. Over time, Le introduces his brother and sisters, uncle and aunt, even the graves of his parents and other brothers, endlessly spinning wild yarns that Frazier reproduces without judgment. Elements of tragedy (the girlfriend of Le’s brother is killed by a drunk driver) mingle with near-misses (a hose breaks at the distributor, enveloping the family in a cloud of propane gas), but all this is the normal state of affairs at Pine Ridge. As Frazier ponders the history of Indian bars locally and nationwide, or considers the treaty violation that allowed the US government to steal the Black Hills from the Sioux, he also finds resilience in the great-granddaughter of medicine man Black Elk, and hope in the remarkable story of SuAnne Big Crow, a teenage basketball hero who reunited her bitterly divided people by her example, and whose spirit still lives even after her death in a car crash in 1992. Frazier’s remarkably thorough and thoroughly eclectic study of one people in one place at a particular moment in time reveals as much about its author as its subject, and as much about “us” as “them.” (Photos, maps, not seen)