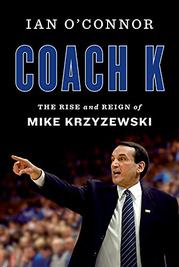 The Rise and Reign of Mike Krzyzewski

A full-court look at NCAA men’s basketball’s all-time winningest coach on the eve of his retirement.

Who would have guessed that the Chicago-born son of poor, first-generation Polish-Americans with an unpronounceable surname would grow up to lead an elite private school to five national championships while amassing more than 1,000 wins and producing numerous NBA superstars? Even after a standout high school career that led to him playing for legendary coach Bob Knight at Army, Mike Krzyzewski (b. 1947) hardly seemed destined for superstardom. When Knight left for Indiana, however, Krzyzewski succeeded him and coached Army to some impressive victories, which won him an interview at Duke. Athletic Director Tom Butters chose Krzyzewski over far more qualified candidates. Though Krzyzewski didn’t consent to be interviewed for this book, he didn’t discourage anyone in his inner circle from speaking with New York Post columnist—and longtime ESPN writer—O’Connor, the author of biographies of Derek Jeter and Bill Belichick. O’Connor effectively leverages a broad cast of characters to chronicle Coach K’s rocky start at Duke (Butters never wavered in his support); the critical role of his family, especially wife Mickie, in his life and his program; his rise to the apex of college basketball; his stint coaching USA men’s basketball to three consecutive Olympic gold medals; and his fraught relationship with combustible mentor Knight. The author doesn’t shy away from Krzyzewski’s shortcomings: A fiery competitor, he can be petty and temperamental and has difficulty apologizing; as a tactician, he’s not particularly innovative. O’Connor also probes the few occasions that the program has toed the line of impropriety and highlights how Coach K leverages every possible recruiting advantage (perhaps unfairly), such as getting NBA players like LeBron James to sing his praises. He also makes a powerful case for why Krzyzewski has achieved such immense success: He’s an extraordinary communicator and motivator, brilliant organizer, and tireless worker who prioritizes family and team above all else.