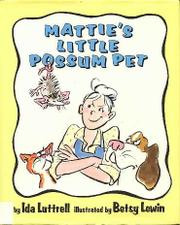 This may be Mattie's story, but her cat (Prowler) and dog (Howler) swipe it right out from under her nose. When Mattie takes in an apparently ailing possum and sees only its better nature, Prowler and Howler become victims of its true varmint self. Anyone who's ever been unjustly accused will especially love it—the possum's comeuppance is purely beautiful, with the pets finding themselves back in favor, appreciated as never before. Lewin's expressive illustrations are bravely sketchy, allowing the hook of an eyebrow or the line of a mouth to convey comic overtones; Prowler playing dead is a priceless portrait of a cat driven to desperate measures. Folksy in language, spirited in delivery, a winning read-aloud or -alone that should become a story-hour favorite. (Picture book. 4-8)