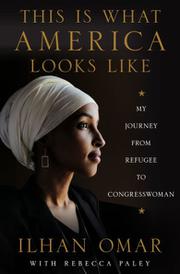 My Journey From Refugee to Congresswoman

by Ilhan Omar with Rebecca Paley

By any measure, Omar's trajectory is dramatic and remarkable: Born in 1982 into a loving, stable family in Mogadishu, Somalia, she was displaced at age 8 by the civil war that killed hundreds of thousands in her home country. She escaped to neighboring Kenya and spent four years in a squalid, dangerous refugee camp. After being screened by immigration authorities, she and her family were allowed into the U.S. They spent two years in New York City and then moved to Arlington, Virginia, where Omar was bullied constantly. Nonetheless, and even though she knew very little English, she was determined to learn. Landing in Minneapolis a few years later, Omar blossomed into a leader at her high school. In 2009, she relocated to North Dakota to earn a college degree, and, upon her return to Minneapolis, she became involved in local politics. In 2018, she and Rashida Tlaib of Michigan “became the first Muslim women elected to Congress.” As a junior member of the House of Representatives, she gained notoriety for her grace in the face of attacks by Donald Trump aimed at her ethnicity, dark skin tone, religion, citizenship, and political advocacy. Naturally, Omar feels confused and angered by Trump and many of his fellow Republicans. Refreshingly and wisely, however, she waits until Page 225 before turning her attention to Trump’s petty tactics. Her trajectory to that point is impressive and compelling. It’s clear that the author has always made her own way while struggling to find her role among her beloved family members, not all of whom approved of her path. Page after page, Omar is by turns fierce, self-deprecating, and confident, and, with the assistance of Paley, she has produced a smoothly readable narrative.

No matter a reader's personal politics, Omar's life should serve as an inspiration.