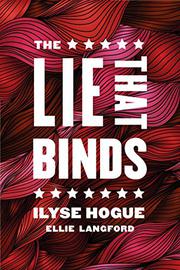 THE LIE THAT BINDS

Incisive look at the destructive path of anti-abortion ideology in the U.S.

Even though most Americans believe in a woman’s right to choose—“consistent research has shown that more than 7 in 10 Americans support legal access to abortion”—the radical right has succeeded in steadily eroding reproductive freedoms since Roe v. Wade. According to NARAL Pro-Choice America leaders Hogue and Langford, the campaign against abortion is but a means to an end for the architects of the pro-life movement. Their true aim is the uncontested dominion of White Christian men. The battle began in 1954, when Brown v. Board of Education struck down “state laws used by segregationists to maintain structural inequality in the nation’s schools.” In 1976, the IRS rescinded the tax-exempt status of the Rev. Jerry Falwell’s segregationist Bob Jones University. What has followed, argue the authors convincingly, is more than a half-century of machinations designed “to halt progressive cultural change and maintain power for a privileged minority.” Anti-abortion rhetoric is just a weapon, driven by design, propaganda, disinformation, and cowed Republican politicians—hallmarks of the Trump era. Hogue and Langdon make a strong case that the rises of Trump, fake news, and science skepticism are not flukes but rather the culmination of a dogged campaign by forces still smarting from desegregation and second- and third-wave feminism. The reproductive freedom of American women is the victim of an “anti-democratic power grab on a historic scale.” The authors build a chilling case that the startling 2019 wave of abortion bans across the nation should serve as a canary in the coal mine for citizens concerned with democracy and a catalyst for bolder messaging, better strategic planning, and sustained action to combat disinformation.

A cogent “horror story” about the plot to reanimate mid-20th-century White male supremacy at the expense of abortion access.