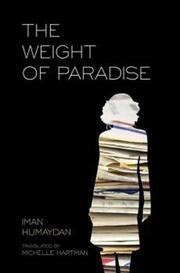 THE WEIGHT OF PARADISE

A suitcase found in an old Beirut building changes one woman’s understanding of her city, her life, and the world at large.

The fourth novel by Humaydan (B as in Beirut, 2007, etc.) alternates between the war-ridden Beirut of the late 1970s and the same city some 20 years later, now beset by reconstruction crews. As in her earlier works, Humaydan is concerned here with the lives of women: their losses, struggles, and victories. She interweaves the stories of a few women separated by time and circumstance. She begins with Maya, a writer and maker of documentary films, who has recently moved back to Beirut after years spent in Paris. In the midst of researching a film about Beirut’s ongoing reconstruction, Maya comes across a suitcase hidden in an old, abandoned, bombed-out house. Inside the suitcase she discovers the diaries of a woman named Noura Abu Sawwan, a journalist who apparently died in a car bombing in 1978. Tucked in with the diaries are letters from Noura’s lover, Kemal, as well as photographs and other documents. Maya becomes obsessed with the cache, piecing together Noura’s story by way of the various documents. She even finds one of Noura’s old friends, Sabah, still living in Beirut, and goes to interview her. Through these three women, Humaydan is able to present a kind of mosaic of women’s lives in Beirut as well as in Damascus and a small Turkish village from which Noura and Sabah emigrated. She shows the various degrees to which these women have and have not escaped oppression. Her portraits are sensitive and frequently moving. Unfortunately, Humaydan can also be heavy-handed, prolix when her meaning was already implicit. Her handling of the narrative is sometimes-clumsy, with chapters that seem to lurch open and closed. A little more finesse, or at least fine-toothed editing, could have improved the pacing of the prose. The end is rushed. Still, Humaydan writes incisively about her characters and their fears, frustrations, and, most importantly, their hopes.

Humaydan’s newest novel is an engaging, if sometimes-clunky, portrait of life in one battered corner of the Middle East.