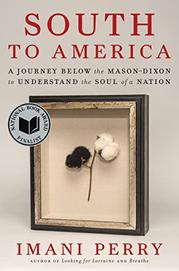 Travels through fraught landscapes in the American South.

Perry, professor of African American studies at Princeton, melds memoir, travel narrative, and history in an intimate, penetrating journey through the South, from the Mason-Dixon Line to Florida, West Virginia, and the Bahamas. “Paying attention to the South,” she asserts, “allows us to understand much more about our nation, and about how our people, land, and commerce work in relation to one another, often cruelly, and about how our tastes and ways flow from our habits.” At Harpers Ferry in West Virginia, she met a Confederate reenactor—playacting she derides. Yet she found him endearing, empathizing with his yearning “to live inside history, to know its nooks and crannies, to imagine the everyday.” A native Alabaman, Perry is the daughter of civil rights activists, a White Jewish father who left the North to teach at a historically Black college and a Black mother whose family had migrated to Birmingham. Although the author has lived in Cambridge, Boston, Chicago, and Philadelphia, to her, home is “deep” within the “red earth” of Alabama. She reflects on her own experiences of racism as a biracial woman and explores ways that Blacks have adapted historically, and she engagingly chronicles her visits to communities that embody the term “broken oasis,” efforts of Black Americans to embrace the nation’s politics and culture while remaining independent. They were destroyed, she notes, “by the habits of White Supremacy.” In progressive cities and rural towns, the author finds plenty of evidence of “the plantation South, with its Black vernacular, its insurgency, and also its brutal masculinity, its worship of Whiteness, its expulsion and its massacres, its self-defeating stinginess and unapologetic pride”—in short, the essence of America. The South, she notes, is “conservative in the sense of conservation. But what that means is not in fact easily described in political terms.”