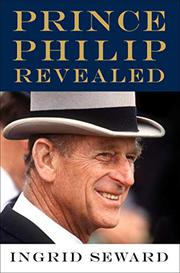 The longtime editor of Majesty magazine presents a refreshingly nonhagiographic biography of Prince Philip (b. 1921).

In her latest book on the royal family, Seward, a leading expert on the subject, paints a picture of a complex figure: a man of intelligence and energy with a wide array of achievements who has also been a bad father and a difficult, cantankerous boor. Born a prince in Greece, Philip's links to British, Danish, German, and Russian royal bloodlines were so impeccable that the fact that he came into his marriage with two suitcases of possessions to his name—plus a disgraced father, a schizophrenic mother, and four sisters married to Germans—was no obstacle. Third cousins, Elizabeth and Philip met when they were very young; the princess was utterly smitten at age 13. Philip's way with the ladies is well known—Daphne du Maurier is just one of many alleged lovers—but Seward downplays that element of his life. "What remains,” she writes, “is a combination of speculation, innuendo, and pure invention.” Ever the sportsman, Philip is "a very good cricketer, a world-class polo player, a race-winning yachtsman, and a world-champion carriage driver, and…has ﬂown thousands of hours in many types of aircraft." He's also a passionate conservationist, a talented interior decorator, and co-author of a philosophy book that explores such questions as "What are we doing here? What is the point of existence?” Seward's all-seeing gaze follows the man into his rural retirement, by which time "the divorces of three out of four of his children, the divorce of his ﬁrst grandson, and the problems with his grandson Prince Harry and, more poignantly, his own son Prince Andrew make a depressing appraisal." In 2019, at age 97, he was involved in a car accident that injured civilians, and he gave up his keys. Thereafter, he "pounced on the idea of resurrecting the late Queen Mother’s golf buggy." We leave him with his memories, tooling around the farm.