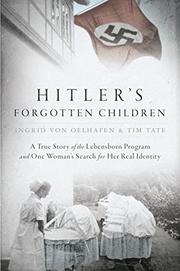 A history of the Nazi eugenics program, which involved hundreds of thousands of children, including the author herself.

That the Nazis, operating under complex notions of racial superiority and Aryan purity, were obsessed with eugenics and committed to “ethnic cleansing” is far from news. What von Oelhafen brings to the story is a personal dimension: born Erika Matko, she was removed from her home, like countless other children possessing the desired phenotypical characteristics, and placed with a German family to be raised as a citizen of the Third Reich, her previous identity essentially erased. In her case, Erika came to live in the home of a senior military officer decades younger than his wife. Separated with the partition of Germany by the victorious Allied powers, young Erika, now Ingrid, approached adulthood without any knowledge of a past that she had suddenly to confront when trying to secure a birth certificate in order to enroll in college. “I was only seventeen and not as aware of history as I have since become,” she writes, adding that whatever story her adoptive mother concocted for the university officials “was not, I think, wholly truthful.” On learning of her identity before her kidnapping into the Lebensborn program, she at first bridled, insisting on using her German name, then deprived of it “since I wasn’t part of the family by blood.” That reversal of fortunes leads her, as her story progresses, into a complex quest to find her true kin, helped along by others caught in the eugenics program and steadily broadening her scope while seeking “to know how this double identity has occurred.” While it is sometimes repetitive and overwrought, her narrative will be of interest not just to students of the Nazi regime, but also to adoptees seeking their own birth parents.

A moving memoir, if an earnest footnote to the history of the Third Reich.