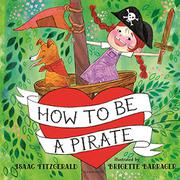 HOW TO BE A PIRATE

Feminism for the piratically inclined.

Fitzgerald and Barrager give the old chestnut of a girl who’s turned away from a boys’ fort due to her gender alone a piratical twist. After CeCe’s initial disappointment, she vows to get advice from the only true pirate she knows: her grandfather. Game to give his granddaughter a 101 in how to be the best possible scurvy dog, he uses each of his tattoos to extol a virtue such as bravery or speed. As in Alison McGhee and Eliza Wheeler’s Tell Me a Tattoo Story (2016), body art becomes the inspiration for any number of adventures and aphorisms, ending with the most important lesson: love. Readers may note that few of these flights of fancy have much to do with pirates specifically. Nevertheless, an emboldened CeCe returns to the boys and successfully owns her piratude. The ending is more than a bit optimistic, as CeCe gains admission simply by redeclaring intentions with a smidgen more chutzpah. Would that misogyny always rolled over so easily. Happily, Fitzgerald’s tale is accompanied by the rollicking vibrancy of Barrager’s art. Reality pales (literally) in the face of the imagination, with a clever tonal shift to a brighter, more saturated palette indicating CeCe’s determination. CeCe and Grandpa both present white; the boys who initially snub her display a range of skin colors and hair textures.

While thar be precious little piracy visible in this, its feminist themes are strong.