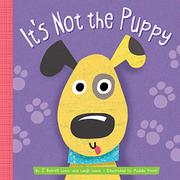 IT'S NOT THE PUPPY

The big-eyed pup on the cover of this board book is obviously a scamp and quite possibly to blame for all sorts of mayhem—or maybe not.

Each page shows a different character engaged in some activity, often mischievous, that might be expected from a dog, but the picture and text clearly indicate otherwise. The actual culprits are not named, and not all are animals. They include a bunny, raccoon, cat, and three children. Young children will quickly pick up the refrain, “It’s not the puppy?”—the proper response to the unobtrusively rhyming question posed on each left-hand page. The language is clear and direct: “When he waves his furry tail, / who knocks down the garbage pail?” The lively, cartoon illustrations include plenty of related details—flowers in the garden where the bunny digs, flies buzzing around the garbage can a raccoon has raided. Unfortunately, the pictures of children tend to reinforce gender stereotypes with what appears to be boys having active roles—tracking in mud while chasing a ball and practicing “doggy paddles in the tub.” The only child textually identified by gender is a girl hiding from thunder. The final picture is of another, less-fearful pigtailed child waking to “a big wet kiss surprise… / it IS the puppy!” All children depicted have brown skin and curly black hair.

Don’t expect kids to pause to identify the mischief-makers or talk about the pictures, at least at first—do expect a request to “read it again.” (Board book. 1-3)