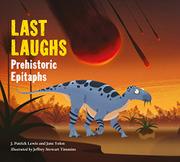 “Trilobites the Dust,” and so do the rest of a cast of extinct creatures in this sequel (prequel?) to Last Laughs: Animal Epitaphs (2012).

In chronological order from the Paleozoic to the Cenozoic eras, dinosaurs, prehistoric reptiles, and early mammals offer memento mori in pithy verse. “Iguanodon, Alas Long Gone,” for example runs: “Iguano dawned, / Iguano dined, / Iguano done, / Iguano gone.” With similar brevity, “Plesiosaur Sticks His Neck Out” of Loch Ness and has it chopped through by a Pict (a footnote admits the anachronism), and unknown agents leave “Pterrible Pterosaur Pterminated.” In later times, a saber-toothed cat (“Tiger, tiger, hunting bright / near the tar pits, late at night”), a dire wolf, and a woolly mammoth are all depicted trapped in the gooey muck. Each poem comes with an explanatory note, and a prose afterword titled “A Little About Layers” discusses how the fossil record works. Timmins reflects this secondary informational agenda in his illustrations without taking it too seriously—providing a spade-bearded, popeyed paleontologist who resembles a spud in shape and color to usher readers through galleries of fossil remnants or fleshed-out specimens meeting their ends with shocked expressions.

The poetry and prose form more of an uneasy détente than an integrated whole, but the comical pictures and the wordplay in these dino demises provide sufficient lift.