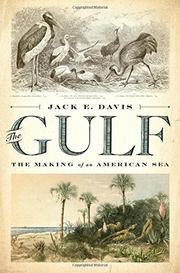 The Making of an American Sea

A sweeping environmental history of the Gulf of Mexico that duly considers the ravages of nature and man.

In light of the 2010 devastation of the BP oil spill, environmental historian Davis (History and Sustainability Studies/Univ. of Florida; An Everglades Providence: Marjory Stoneman Douglas and the American Environmental Century, 2009, etc.) presents an engaging, truly relevant new study of the Gulf as a powerful agent in the American story, one that has become “lost in the pages of American history.” Once the habitat of the highly developed, self-sustaining Calusa indigenous people, the rich estuary of the Gulf is the 10th largest body of water in the world, and it forms the sheltered basin that creates the warm, powerful Gulf Stream, which allowed the first explorers, such as Ponce de León, to make their ways back to the Old World. Davis meanders through the early history of this fascinating sea, which became a kind of graveyard to many early marooned explorers due to shipwrecks and run-ins with natives. Yet the conquistadors took little note of the abundant marine life inhabiting the waters and, unaccountably, starved. A more familiar economy was established at the delta of the muddy, sediment-rich Mississippi River, discovered by the French. The author focuses on the 19th century as the era when the Gulf finally asserted its place in the great move toward Manifest Destiny; it would “significantly enlarge the water communication of national commerce and shift the boundary of the country from vulnerable land to protective sea.” The Gulf states would also become a mecca of tourism and fishing and, with the discovery of oil, enter a dire period of the “commercialization of national endowments.” The story of this magnificent body of water and its wildlife grows tragic at this point—e.g., the “killing juggernaut” of Gulf wading birds to obtain fashionable feathers. Still, it remains an improbable, valiant survival tale in the face of the BP oil spill and ongoing climate change.

An elegant narrative braced by a fierce, sobering environmental conviction.