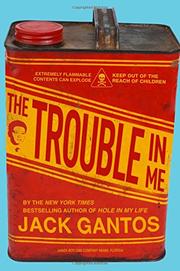 THE TROUBLE IN ME

A misbegotten effort to reinvent himself leads young “Jack” to burn his notebooks and clothes, though not quite his bridges, in Gantos’ latest burst of confessional fiction.

This summer episode falls in chronology shortly after Jack’s Black Book (1997). Dissatisfied with his life and looking for a new model, 14-year-old Jack fixes with characteristic lack of good judgment on next-door-neighbor Gary Pagoda—a leather-jacketed older teen fresh out of juvie. Gary turns out to be a dab hand not only at testing his new amanuensis with life-threatening backyard games, but also hot-wiring cars and other thrillingly illegal amusements. Reflected in both jacket cover and chapter titles, fire or fireworks play a recurring role in events as Jack tries to make a clean break with his past by torching both his childhood journals and his clothes (replacing the latter with shoplifted goods). Jack’s narrative has a Wimpy Kid tone and appeal as, looking back, he’s well-aware of his own youthful fecklessness and almost eager to point out where he went wrong. But, not very surprisingly for readers who have been following his checkered career, he turns out to be a miserable failure at real evil.

Readers will laugh, possibly uneasily, at Jack’s reckless antics and lack of impulse control, but they will probably also sympathize with his deep itch to make a change.