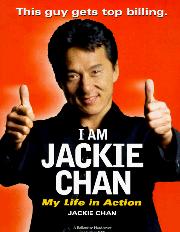 I AM JACKIE CHAN

My Life in Action

by Jackie Chan with Jeff Yang

Hong Kong action star Chan tells his story to journalist Yang (Eastern Standard Time, not reviewed), and a colorful rags-to-riches tale it is. Chan is best-known as a man who does all his own stunts, no matter how insanely dangerous or harrowing, a genuinely likeable Everyman figure who is summed up by the title of his most recent American release: Mr. Nice Guy. Although he is a master of kung fu, his film persona is that of the ordinary guy who feels pain, who loses fights occasionally, and who survives by his wits and agility rather than superhuman strength. Delightfully enough, that is the same personality that emerges from this surprisingly artful as-told-to. Chan focuses on his childhood and early career struggles for most of the book, only reaching his present level of stardom (he’s the biggest box-office draw in Asia, and rapidly approaching similar status everywhere else) in the last 75 pages. His childhood story is offbeat, perhaps well known to his fans but a glimpse into a very different world for everyone else. When he was seven, his parents handed him over to the China Drama Academy, where he ate, slept, and lived for ten years, studying the arts of the Chinese opera under Dickensian conditions. Chan recounts this story of 12-hour days, beatings, and other punishments with a finely judged sense of right and wrong, without a grandstanding sense of outrage, and with considerable humor. The rest of his story is told with appealing modesty as well. The book concludes with a very detailed filmography and lists of his ten most dangerous stunts and favorite fight scenes. An entertaining tale, well enough told that it should be of interest even to those who have never seen a Jackie Chan film, if any such people still exist. (8 pages color, 16 pages b&w photos)