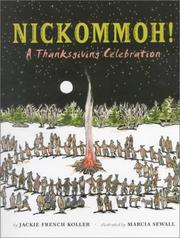 Koller (Bouncing on the Bed, p. 143, etc.) portrays a Narragansett nickommoh, or celebratory gathering, from which it is very likely the tradition of Thanksgiving was drawn. As explained in an exemplary note—brief, clear, interesting—at the end of the book, these gatherings occurred 13 times a year, once each lunar month. The harvest gathering is one of the larger gatherings: a great lodge was built, copious food was prepared, and music and dance extended deep into the night. Koller laces the text with a good selection of Narragansett words, found in the glossary (although there is no key to pronunciation, even for words such as Taqountikeeswush and Puttuckquapuonck). The text is written as a chanted prose poem, with much repetition, which can be both incantatory and hackneyed, as when “frost lies thick on the fields at dawn, and the winged ones pass overhead in great numbers.” Mostly the phrases are stirring—as are Sewall’s scratchboard evocations—and often inspirational—for this nickommoh puts to shame what has become known as the day before the launch of the holiday shopping season. (Picture book. 6-9)