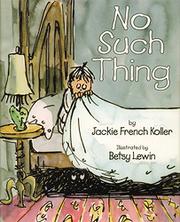 Any child who has been convinced of the presence of a monster at bedtime will feel vindicated by this satisfying story from Koller (A Place to Call Home, 1995, etc.). During his first night in his new home, Howard is fearful of a monster he thinks is under the bed. His mother assures him there is none, and leaves. Meanwhile, under the bed, Monster's mother is reassuring him that there are no such things as boys, one of whom he is certain is on top of his bed. She tucks him in and leaves. After several similar confrontations, the exasperated mothers have had it, so the boy and the monster must deal with each other directly. Conquering their fears, each has a moment of hysterical laughter over the idea that he might eat the other. Then they hatch a terrific plan, trading places on the bed and calling upon their mothers one last time. Readers are left to guess how the mothers will react. The versatile Lewin works in flowing watercolors, a loose style that makes the overlap between the boy's and monster's worlds completely acceptable and intensifies the story's humor. This tautly told story in which two stern mothers get their comeuppances is irresistible. (Junior Library Guild selection) (Picture book. 4-8)