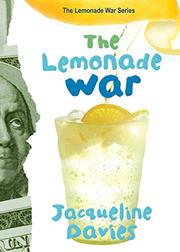 From the Lemonade War series, volume 1

Told from the point of view of two warring siblings, this could have been an engaging first chapter book. Unfortunately, the length makes it less likely to appeal to the intended audience. Jessie and Evan are usually good friends as well as sister and brother. But the news that bright Jessie will be skipping a grade to join Evan’s fourth-grade class creates tension. Evan believes himself to be less than clever; Jessie’s emotional maturity doesn’t quite measure up to her intelligence. Rivalry and misunderstandings grow as the two compete to earn the most money in the waning days of summer. The plot rolls along smoothly and readers will be able to both follow the action and feel superior to both main characters as their motivations and misconceptions are clearly displayed. Indeed, a bit more subtlety in characterization might have strengthened the book’s appeal. The final resolution is not entirely believable, but the emphasis on cooperation and understanding is clear. Earnest and potentially successful, but just misses the mark. (Fiction. 8-10)