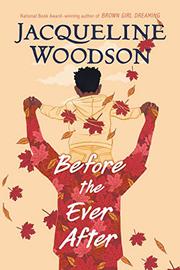 BEFORE THE EVER AFTER

Twelve-year-old Zachariah “ZJ” Johnson Jr. loves his dad but wonders who he would be if his dad was not a famous athlete. Although his dad is in the spotlight, he is full of love and attention for ZJ and his friends. And fortunately, ZJ has three friends who see him and not his father’s shadow. “Zachariah 44” was a fearless player who suffered many concussions during his playing career. The changes in his father begin slowly and intermittently. Soon the headaches and memory lapses grow increasingly frequent and scary for ZJ and his mom, since the doctors do not seem to have any answers. As his dad slips further away, ZJ’s memories of better times grow closer than ever. Using spare and lyrical language for ZJ’s present-tense narration, which moves back and forth through time, Woodson skillfully portrays the confusion, fear, and sadness when a family member suffers from brain injury and the personality changes it brings. Readers see Zachariah Sr. through ZJ’s eyes and agonize with him as the strong, vibrant athlete begins to fade. The well-rounded secondary characters complete a mosaic of a loving African American family and their community of friends. The tale is set in the early 2000s, as awareness of chronic traumatic encephalopathy and its catastrophic consequences was beginning to emerge.

A poignant and achingly beautiful narrative shedding light on the price of a violent sport.