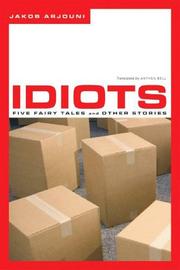 Five Fairy Tales and Other Stories

Outsized egos take a shellacking in nine crafty, contemporary tales about vanity and the titular “idiots” who succumb to it.

In each of the first five stories, a fairy appears, hovering just inches above the urban German turf where, in succession, five hapless narcissists—an ad executive determined to salvage his firm; a young film director frightened of his own brilliance; a mother jealous of her famous son; a hack writer disgusted by his commercial success; an alcoholic know-it-all desperate for recognition—bemoan their plights and are in turn offered the granting of one wish. Although the fairies vary from tale to tale (several are cranky, another is a newbie recently promoted from shooting-star service), they all stick to the rules: one wish only, no wishing for more than one wish, while wishes for immortality, health, money and love are verboten. It’s a thankless job. Each grantee quibbles with the rules (denied immortality, the director asks for at least 200 years), dismisses the fairies’ suggestions (insulted by the offer of a dishwasher, the mother says she ran a left-wing record store for 28 years and washed dishes by hand all her life), misunderstands what the fairies are offering (the alcoholic asks for four Alka-Seltzers) and inevitably wishes for something that yields un-wished-for consequences. The conceit works, but the four closing stories are even better. In these, German novelist Arjouni (Magic Hoffman, 2000, etc.) shifts his creative talents and humor into overdrive, with results as smooth as an S-Class Mercedes on the Autobahn, as when a wannabe novelist, by recounting his plot, winds up lulling to sleep a bank robber who’s holding him hostage at gunpoint; or when a famous director pays a hitchhiker to pose as his long-lost writer-friend at a party, where, when another guest inquires what genre he writes, the imposter responds, “Holy Scripture.”

Are you wishing for a wry, sly book about the human comedy? Wish granted.