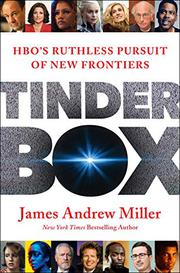 A retrospective of HBO’s nearly half-century of multiplex programming portrayed through the words of a cavalcade of celebrities, developers, and innovators.

Using material from more than 750 interviews with a host of insiders, noted journalist Miller presents an exhaustive account of the network’s pioneering projects. In a well-rendered, frequently surprising chronicle, the author covers seemingly every inch of ground: HBO’s “treacherous birth” in 1972, early ups and downs, the use of satellite technology, and the development of groundbreaking movies, award-winning documentaries, uncensored comedy, and unique sports programming, which elevated televised boxing matches to new heights. Miller spotlights many of HBO’s success stories through first-person commentary and ventures deep into how these history-making shows were developed, produced, and became hits. The histories of classics like The Larry Sanders Show; the “stunning trifecta” of Sex and the City, The Sopranos, and Curb Your Enthusiasm; Game of Thrones; and even the decadeslong run of the voyeuristic Taxicab Confessions are fascinating to read, all recounted via the memories of those who were there. Many of Miller’s interviewees viscerally describe the stress, struggle, joys, and pains of being on a consistently successful hit show where “cast, crew, and network executives get tossed together in a pressure cooker for years on end, and it’s rare that some don’t suffer accordingly.” This was especially true for the Sopranos team and its star, James Gandolfini, who struggled with addiction and, once he became an irreplaceable commodity to the network, leveraged his power to his ultimate advantage. Though the text is more than 1,000 pages, its length is justified by the sheer amount of insightful commentary, juicy insider opinions, and celebrity and executive melodrama. Collectively, the chorus of voices creates an informative and compelling indulgence about how a particular culture of entertainment is formed and fostered. In that sense, the book recalls Those Guys Have All the Fun: Inside the World of ESPN, which Miller co-authored with Tom Shales.