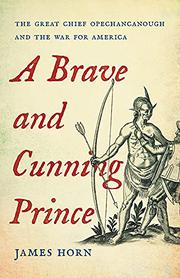 A BRAVE AND CUNNING PRINCE

The Great Chief Opechancanough and the War for America

An accomplished work of scholarly detection that plays out against the background of the English colonization of Virginia.

Opechancanough, the center of Virginia historian Horn’s narrative, was abducted from his Chesapeake Bay homeland by Spanish sailors in the 1550s and taken to Mexico and Spain, where he met King Philip II. Recorded in the Spanish annals as Paquiquineo, a name simplified as Don Luis, he converted to Catholicism and promised to help the Spanish establish a colony on Powhatan lands, the site of a tight confederacy of Native nations. After returning there, however, he organized the massacre of Jesuit priests who had established a mission not far from present-day Richmond. The brother of the king, and in the line of royal succession, Opechancanough then mounted a long war of resistance against the English. Horn ventures two potentially controversial suggestions: first, that Don Luis and Opechancanough were one and the same, since some historians have argued that they were not; and second, that Opechancanough and his elite band of warriors were responsible for the disappearance of the Roanoke Colony, long a matter of historical speculation. He provides convincing evidence for both assertions, building on a portrait of Virginia and its neighbors that, at the time of the European arrival, was the site of a sophisticated political and economic network whose participants were well aware of distant events and who coordinated to fight the newcomers. Some familiar figures appear, including John Smith and Pocahontas, on both of whom Horn sheds new light as players in a drama that would unfold over decades. He portrays Opechancanough as a man who, having seen the subjugation of Native peoples and the enslavement of Africans in Mexico, knew exactly what was coming on those English ships and fought to prevent their successful settlement—which, thanks to both the divisions of the English civil war and Opechancanough’s fierce fighting, almost didn’t happen.

Swift-moving prose along a twisting storyline lends this brilliant book the feel of a mystery.