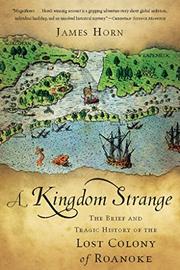 The Brief and Tragic History of the Lost Colony of Roanoke

The story of the mysterious disappearance of the colonists who attempted to set up the first permanent British colony in the Americas.

Colonial Williamsburg Foundation vice president Horn (A Land As God Made It: Jamestown and the Birth of America, 2005, etc.) uses new archival material to piece together the history of more than 100 British colonists who landed on Roanoke Island, off the coast of North Carolina in 1587. The venture, sponsored by Sir Walter Ralegh, encountered trouble from the start. The colonists found the new land entirely inhospitable; they contended with fast-dwindling supplies as well as aggressive Native Americans, who brutally killed one colonist days after their arrival. Just one month after their initial landing, the settlers’ leader, John White, sailed back to England to obtain a relief force and to replenish supplies. When he finally returned in 1590 after many delays, the colony had disappeared, seemingly deserted. What happened to the colonists has been a mystery for centuries, with a number of different ideas advanced by historians over the years. Horn constructs a detailed theory of what he believes happened to many of the colonists—that they lived on elsewhere for years afterward, only to meet a tragic end. The author creates an engaging, you-are-there feel to the narrative, with rich descriptions of European politics, colonists’ daily struggles and the vagaries of relations between Native American tribes. Horn also provides helpful drawings and maps—many by John White—throughout this relatively brief but comprehensive book.

A satisfying recounting of some of the earliest American history.