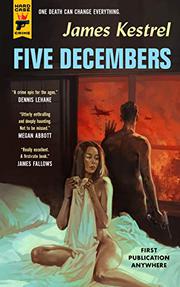 A Honolulu cop’s search for an unusually brutal killer is upended by the arrival of World War II, which puts his investigation on hold and adds an epic dimension to his quest.

Called over Thanksgiving weekend 1941 to a shed where an unknown young White man has been gutted and hung upside down, Detective Joe McGrady soon finds a second butchered corpse, that of a bound, naked Asian woman whose throat has been cut with the same Mark I model trench knife, and creates a third when he returns to the scene and wins a gunfight with a nameless scar-faced man. Capt. J.H. Beamer, who puts McGrady in charge of the case, clearly doesn’t like or trust him and keeps him on a short leash because the first dead man’s uncle, Adm. Kimmel, pulls a lot of weight, and his moneyed associate, John Francis Kincaid, even more. Acting on evidence McGrady’s unearthed, Beamer sends him to Hong Kong in search of the mysterious John Smith, who’s become the leading suspect. The morning after McGrady arrives, the Japanese bomb Pearl Harbor, cutting off any hope of his return home, and his trip stretches out to three years, first as a prisoner of the Hong Kong Police when Smith frames him for aggravated rape, then as a fugitive in the Tokyo home of Takahashi Kansei, the dead woman’s pacifist uncle in the Japanese Ministry of Foreign Affairs. Exposed to a bewildering variety of people, locations, and beliefs, McGrady miraculously manages not only to keep his cool in a world gone mad, but to return to Honolulu, where he was reported dead long ago, and close the case.