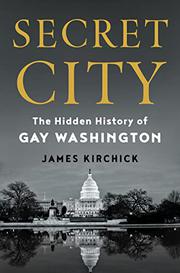 The Hidden History of Gay Washington

A comprehensive history of key political power struggles and controversies of the past century, focused on those Americans “whose obscurity was the consequence of their being forced to hide.”

In this absorbing and well-documented book, Kirchick, author of The End of Europe: Dictators, Demagogues, and the Coming Dark Age, engagingly draws attention to a variety of gay histories that have been largely lost to mainstream history. At the same time, he shows how Americans’ deep-seated fear of homosexuality was often amplified by political leaders. “Nothing posed a more potent threat to a political career, or exerted a more fearsome grip on the nation’s collective psyche, than the love expressed between people of the same sex,” writes the author. “While America fought fascism, political and cultural leaders associated [homosexuality] with the nation’s Nazi enemies. During the Cold War, voices from across the political spectrum linked it with communism.” Kirchick diligently tracks each presidential administration from Franklin Roosevelt through Bill Clinton. The author discusses the sexual scandal that would force Sumner Welles, FDR’s undersecretary of state, out of office; the onslaught of the AIDS epidemic during the Reagan and Bush administrations; and the policies of the Clinton administration, which were more open-minded despite the ill-advised “don’t-ask, don’t-tell” policy. Throughout, Kirchick sheds light on the stories of several individuals whose efforts bravely contributed to gradual acceptance and an expansion of opportunities for gay Americans, including civil rights organizer Bayard Rustin and John Ford, Reagan’s deputy assistant agriculture secretary. While ambitious and convincing, the narrative goes slack in certain areas; some readers may get the sense that the book would have been better presented as a multivolume history, affording Kirchick the opportunity to examine specific elements without losing momentum. In particular, the early chapters—about how the fear of homosexuality became entangled with the fear of communist influence—are worth further study. Though overlong, the book offers countless illuminating stories that have been grossly underserved in past political histories. The author also includes a “historical map of gay Washington” and a cast of characters.

Not without flaws but an important addition to American history nonetheless.