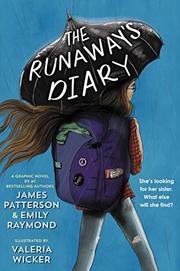 A teenager runs away to Seattle, hoping to locate her missing sister.

Fifteen-year-old Eleanor idolizes her older sister, Sam, despite their being complete opposites: Sam is outgoing and wild, while socially awkward Eleanor is known as Little Miss Perfect, always doing the right and safe thing. After Sam runs away from home, the only communication she has with Eleanor are three postcards sent from Seattle. Eleanor decides to trace her 18-year-old sister’s footsteps, leaving her messages and hopping on a bus to find her. But when Sam doesn’t meet her at the bus depot, Eleanor, who has no real plan, has to learn how to survive on her own while searching the city for her sister. While the close bond between the girls is well depicted through flashbacks, the reveal of an important secret ultimately feels anticlimactic. A major plot point relies too heavily on chance and coincidence to be fully believable. While the color scheme, cityscapes, and background illustrations are atmospheric, the manga-inspired drawing style comes across as dated and flat. The depiction of the fabricated stories Eleanor tells is intriguing, as are the themes of friendship, living in the moment, and maintaining hope; unfortunately, none are thematically strong enough to resonate. The emotional impact of Eleanor’s experiences is diluted by her at times humorous narration. Eleanor and the main cast read as White.

A somewhat entertaining, fast-paced journey that fizzles at the end.