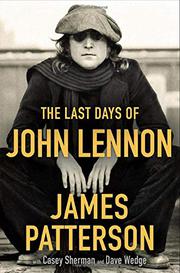 THE LAST DAYS OF JOHN LENNON

Beatlemania meets autopsy in the latest product from the Patterson factory.

The authors take more than half the book to reach John Lennon’s final days, which passed 40 years ago—an anniversary that, one presumes, provides the occasion for it. The narrative opens with killer Mark David Chapman talking to himself: “It’s like I’m invisible.” And how do we know that Chapman thought such a thing? Well, the authors aver, they’re reconstructing the voices in his head and other conversations “based on available third-party sources and interviews.” It’s a dubious exercise, and it doesn’t get better with noir-ish formulas (“His mind is a dangerous neighborhood”) and clunky novelistic stretches (“John Lennon wakes up, reaches for his eyeglasses. At first the day seems like any other until he realizes it’s a special one….He picks up the kitchen phone to greet his old songwriting partner, who’s called to wish him all the best for the record launch”). In the first half of the book, Patterson and company reheat the Beatles’ origin story and its many well-worn tropes, all of which fans already know in detail. Allowing for the internal monologue, things improve somewhat once the narrative approaches Chapman’s deranged act—300-odd pages in, leaving about 50 pages for a swift-moving account of the murder and its aftermath, which ends with Chapman in a maximum-security cell where “he will be protected from the ugliness of the outside world….The cell door slides shut and locks. Mark David Chapman smiles. I’m home.” To their credit, the authors at least don’t blame Lennon’s “Happiness Is a Warm Gun” for egging on the violence that killed him, but this book pales in comparison to Kenneth Womack’s John Lennon 1980 and Philip Norman’s John Lennon: The Life, among many other tomes on the Fab Four.

A thimbleful of fresh content lies buried in tales familiar and often told.