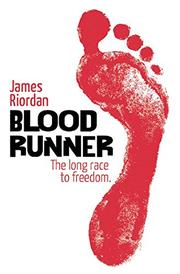 A general indictment of apartheid is thinly wrapped in a tale about a young Zulu marathoner who runs for his country in the Olympics.

When police fire into a crowd watching a peaceful demonstration, they orphan young Samuel and his two older brothers, radicalizing the latter. In later years one brother loses his mind on Robben Island, and the other is killed in a gun battle. Samuel, though, grows up to leverage his love of running barefoot over his dusty tribal “homeland” into a spot on South Africa’s Olympics team after apartheid collapses and Mandela is freed. Riordan loosely bases his disconnected main plot on the experiences of Josiah Thugwane, the first black gold medalist from South Africa. He begins his book with the graphically depicted opening massacre, closely followed by a disturbingly gruesome hospital scene. To these he adds angry rhetoric (“Where was British justice now?”) and ugly words when Samuel goes to get a passbook and later boards a “Whites Only” train car by mistake. For readers who still aren't with the program, he provides infodumps about South Africa’s racial history and the African National Congress and a triumphant set piece when Samuel casts a vote in his first national election. Samuel runs (and wins) the climactic race with a letter from Mandela tucked in his shoe.

This potentially inspiring tale staggers along under the weight of a worthy agenda.