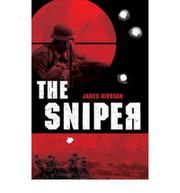 The Battle of Stalingrad changed the course of World War II—but at the cost of one million lives, more than any other battle in history. Tania Belova is 16 when she leaves school, trains as a sniper and helps to defend the Soviet Union from the German invasion in 1942. Based closely on the true experiences of Tania Chernova, awarded the Red Star for bravery, this third-person narrative effectively tells Tania’s gripping tale and offers perspectives on war in general. Riordan’s writing is perfectly accessible for young readers and is also a model of excellent prose—spare, evocative language rooted in active verbs, concrete nouns and well-chosen modifiers. Tania’s story moves along swiftly, as she performs her job well despite her misgivings about war and killing. There is a deep poignancy and a moral tone here, along with exciting action, heroism and anguish. The well-designed cover in black and red, complete with sniper and bullet holes, and the fast-paced tale of war ensure that this fine volume will appeal to many readers. (author’s note) (Historical fiction. 10-13)