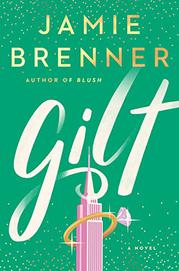 A young woman’s attempt to forge her own path leads her back to her family.

Celeste, Elodie, and Paulina Pavlin lead seemingly charmed lives. They are the three wealthy daughters of Alan, who owns and runs his family jewelry business. Pavlin & Co is credited with putting diamond engagement rings on the map, and its signature emerald green packaging is synonymous with love. (Sound familiar?) But when Alan decides—half for publicity, half on a King Lear–esque power trip—to award the prized Electric Rose diamond ring to the first of his daughters to get engaged, all hell breaks loose. Flash-forward 15 years: Paulina was the first to get married, but she and her husband are dead; their daughter, Gemma, a recent art school graduate with a passion for making jewelry more accessible to the masses, has no contact with the Pavlins. Elodie and Celeste have been feuding for years. Desperate to hold a showstopping auction of the family’s private jewelry collection as a way to bring Pavlin & Co back into relevancy, Elodie, now the company’s CEO, makes her way to Provincetown, where Celeste, long since cut off from the family money, has made a life for herself. Elodie tricks Gemma into joining her there because she needs both her sister’s and niece’s signatures to auction the collection. Gemma’s obsession with the Electric Rose (an obsession that wears on the reader very quickly), Celeste’s conviction that it’s cursed, and Elodie’s familial resentment lead to tense moments and attempts at amends. The book suffers from stilted dialogue, and the choice to make Gemma the emotional center of the novel was a misstep. That said, when Brenner leans into descriptions of the colorful characters of Provincetown and mines Elodie and Celeste’s fraught relationship, she makes up for many of the novel’s faults.

A story of family, healing, and the power of a really great accessory.