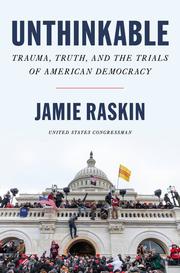 Trauma, Truth, and the Trials of American Democracy

The constitutional lawyer and U.S. Representative considers the events of Jan. 6, 2021, and the lawless administration that fomented them.

“How did we end up here, with fascists trashing our Capitol Building and killing people?” asks Raskin, who led the House’s second impeachment proceedings against the former president. His narrative has three strands. The first is personal looking out on the political, recounting the experiences of his father, one of John Kennedy’s “best and brightest,” who left government in opposition to the nuclear arms race. More effective, and saddening, is the second: the suicide of his son, beset by anxiety and depression, who was buried on Jan. 5. The following day brought “strategic violence by extremist elements outside the Capitol…fusing with manipulative tactics inside the Capitol to coerce Vice President Pence and Congress to overthrow the electoral votes in the states and force us into a contingent election.” Raskin makes two related things eminently clear. First, he and other House leaders were prepared for the Republicans’ coercive ploy, albeit surprised that Pence, “despite lots of genuflecting to the disseminators of the Big Lie,” did the right thing. What they were not prepared for, he writes, was an armed mob storming the Capitol and pursuing elected officials through its corridors. For this, Raskin assigns a measure of self-blame, since Alexander Hamilton warned of just such a possibility in the first of the Federalist Papers, and the former president had recruited “thousands of the…‘very fine’ people he had seen marching on the fascist side of the street in 2017 in Charlottesville” to stage his insurrection. Raskin’s detailed account of the second impeachment proceedings goes on at great but not burdensome length, joining Adam Schiff’s Midnight in Washington as a close study in how such matters work.

A brilliant preface, one might guess, to further legal actions against the disgraced former president for his crimes.