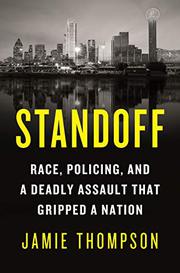 Race, Policing, and a Deadly Assault That Gripped a Nation

An absorbing account of a 2016 ambush that left five Dallas police officers dead.

Based on hundreds of hours of interviews, Texas journalist Thompson chronicles the events before, during, and after July 7, 2016, when a disaffected man acting alone murdered five Dallas police officers and terrorized an entire city before being stopped. The author, who covered the shooting for the Washington Post and, later, the Dallas Morning News, avoids discussing the murderer until more than 200 pages into the narrative. Instead, she focuses on law enforcement and civilians who entered the line of fire, explaining why and how they converged on downtown Dallas on that fatal night. Large crowds had gathered to protest against police in various cities killing civilians without cause, especially black men. The death of Philando Castile in Minnesota had especially angered the protesters. Of all the major characters, Senior Cpl. Larry Gordon is the most memorable. A black officer and negotiator on the Dallas SWAT team, his specialty is to talk to holed-up criminals, citizens contemplating suicide, and any others within his jurisdiction who could be persuaded with words. Gordon seems ideal for his specific task due in large part to his empathy and his understanding of the complex racial undercurrents involved in police work, both of which are on full display throughout the text. As Thompson also makes clear, Gordon does not automatically cover for his brethren; he is unafraid to call out injustice when he sees it. Throughout the book, the author deftly weaves Gordon’s opinions and experiences with those of her other significant characters, including Mayor Mike Rawlings, Chief David Brown, trauma surgeon Brian Williams, public transit police officer Misty McBride, and protester Shetamia Taylor, who was shot in the leg by the perpetrator. Thompson's storytelling gift allows her to maintain suspense despite the outcome being known in advance.