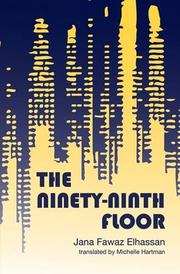 Two star-crossed lovers—one Lebanese and the other Palestinian—meet in New York and try to reconcile their contentious romantic and political feelings in this novel from a Lebanese author who's never been translated into English before.

If the personal is indeed political, then the relationship between Majd and Hilda is loaded from the get-go. Majd designs computer games and has adapted well to the American dream, for his business is comfortably established on the 99th floor of a high-rise in New York City. He remains bitter about the past, however, for he was badly wounded and his mother was killed in the September 1982 massacre in the Sabra and Shatila refugee camp in Beirut. He meets and falls in love with Hilda, who’s come from Lebanon to study dance and fashion design. She comes from a conservative Christian family and still prays often and fervently. They begin a passionate affair, which Hilda interrupts—much to the dismay of Majd—by revisiting Lebanon to get back to her roots. Majd fears, not without reason, that the distance between them might bring an end to their affair. To complicate the love theme, Elhassan creates another relationship—between Majd’s Lebanese friend Mohsen (or Mike) and his voluptuous Mexican girlfriend, Eva—that echoes the primary bond between Hilda and Majd. The personal becomes really political when it turns out Hilda’s family were Phalangists and thus perhaps in part responsible for committing the atrocities at Sabra and Shatila. Once Hilda is back in Beirut she faces the difficult decision of whether to remain or to return to the States and try to redeem her relationship with Majd. Elhassan moves her story seamlessly across two time periods—2000, the “present” of the action, and 1982, when the massacre took place.

An intimate and intense novel that shines a light on both the overt and hidden tensions of the Middle East.