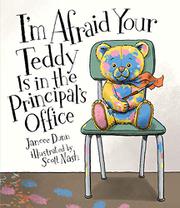 I'M AFRAID YOUR TEDDY IS IN THE PRINCIPAL'S OFFICE

That social butterfly, er, teddy, is causing trouble again, this time at school.

The mischief-maker in question, a light-brown bear, has convinced his various buddies to sneak to school in their kids’ backpacks. Their reign of terror starts in the cafeteria, where they sculpt a sloppy-joe bear, play Frisbee with pizzas, and use spaghetti as wigs and fake mustaches. They tag the wall with condiments. They tie up the gym teacher with jump-ropes and sneak bubble fluid into the band instruments. Before making their pipe-cleaner escape from the art room, they invade the teachers’ lounge (readers will be in stitches at the wonders hiding in that sanctum sanctorum). But in the end, the suspects are lined up in chairs in the office of the principal, a brown-skinned woman who looks like she means business…until she remembers her own beloved childhood bear. Children will surely chuckle at the stuffed friends’ antics, which are just riotous enough that readers will recognize they are not to be emulated (one hopes). The trip to the principal’s office (including the struggles of the vice principal, a white man, to control his laughter) may be accurate for first-timers, but those who make frequent visits are not likely to see the same treatment.

This teddy gang run amok proves that the principal is human, but their adventures are becoming one-note.