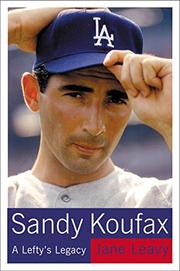 Taut biography of the Dodger great’s playing years: baseball savvy and as far from tall-tale–telling as former Washington Post sportswriter Leavy (Squeeze Play, not reviewed) can get.

Koufax lent himself only incidentally to this work—to verify stories and allow the author access to his friends and family—but Leavy has produced what appears to be a very convincing portrait. She concentrates on the player’s six last, mind-blowing years, when his fastball and curve ruled. His plays on the mound are adeptly recorded—including, as interspersed chapters, his perfect game, told with consummate skill and containing the only hint of hyperbole here: “the ball headed toward home like an eighteen wheeler appearing down the highway out of a mirage.” But it’s a sense of Koufax’s character that Leavy most wishes to convey. Never one for promiscuous self-promotion, Koufax has been shoehorned into the recluse category; because he is reserved and Jewish, he was typecast as “moody, aloof, curt, intellectual, different.” Yes, he wouldn’t pitch the opening game of the World Series because it fell on Yom Kippur, an act with profound cultural impact, and yes, he liked to read, a positive egghead by sporting standards, though he also says: “I may have read Huxley once in my life, but if I did, frankly, I don’t remember.” His 1963 self-profile is true to form: “a normal twenty-seven-year-old bachelor who happens to be of the Jewish faith. . . . I like to read a book and listen to music and I’d like to meet the girl I’d want to marry.” But Leavy reveals also a man of dignity, honesty, and courtesy, not to mention his having that shaman’s touch with a baseball. He is, simply, a standard: “In virtually every way that matters, ethically and economically, medically and journalistically, he offers a way to measure where we’ve been, what we’ve come to, what we’ve lost.”