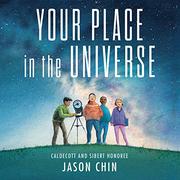 YOUR PLACE IN THE UNIVERSE

From a Caldecott and Sibert honoree, an invitation to take a mind-expanding journey from the surface of our planet to the furthest reaches of the observable cosmos.

Though Chin’s assumption that we are even capable of understanding the scope of the universe is quixotic at best, he does effectively lead viewers on a journey that captures a sense of its scale. Following the model of Kees Boeke’s classic Cosmic View: The Universe in Forty Jumps (1957), he starts with four 8-year-old sky watchers of average height (and different racial presentations). They peer into a telescope and then are comically startled by the sudden arrival of an ostrich that is twice as tall…and then a giraffe that is over twice as tall as that…and going onward and upward, with ellipses at each page turn connecting the stages, past our atmosphere and solar system to the cosmic web of galactic superclusters. As he goes, precisely drawn earthly figures and features in the expansive illustrations give way to ever smaller celestial bodies and finally to glimmering swirls of distant lights against gulfs of deep black before ultimately returning to his starting place. A closing recap adds smaller images and additional details. Accompanying the spare narrative, valuable side notes supply specific lengths or distances and define their units of measure, accurately explain astronomical phenomena, and close with the provocative observation that “the observable universe is centered on us, but we are not in the center of the entire universe.”

A stimulating outing to the furthest reaches of our knowledge, certain to inspire deep thoughts.