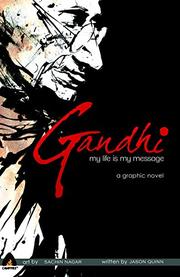 My Life is My Message

From the Campfire Heroes series

A fictionalized graphic “memoir” conveys bright pictures of the Great Soul’s character and achievements without falling into blind hero worship.

Quinn’s account is written in the first person and includes invented thoughts and dialogue that sometimes have an anachronistic ring. These literary gestures notwithstanding, the author retraces Gandhi’s career accurately and in relatively fine detail from childhood to assassination. More importantly, he also depicts the origins, logic and applications of Gandhi’s philosophy of nonviolent disobedience (satyagraha) in deft, compelling strokes. There is a slight drift toward hagiography in later pages, capped by a reference to Gandhi’s “martyrdom,” but this is balanced by a cleareyed view of his actions as a younger man. He justifies his frequent abandonment of his family with a glib, less-than-saintly “Why should I rob my children of their right to self reliance?” His intelligent wife, Kasturba, will elicit particular sympathy, though she does get in her digs: “Oh yes, go, go, leave us again. We’re used to it.” Along with placing the large blocks of dialogue and narrative so that they’re seldom in the way, Nagar expertly positions panels and figures to create a visual sweep even in relatively static compositions. Action in the art is easy to follow, and scenes of violence are explicit but not disturbingly so.