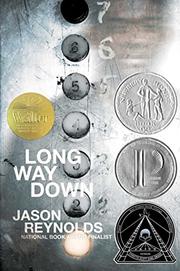 After 15-year-old Will sees his older brother, Shawn, gunned down on the streets, he sets out to do the expected: the rules dictate no crying, no snitching, and revenge.

Though the African-American teen has never held one, Will leaves his apartment with his brother’s gun tucked in his waistband. As he travels down on the elevator, the door opens on certain floors, and Will is confronted with a different figure from his past, each a victim of gun violence, each important in his life. They also force Will to face the questions he has about his plan. As each “ghost” speaks, Will realizes how much of his own story has been unknown to him and how intricately woven they are. Told in free-verse poems, this is a raw, powerful, and emotional depiction of urban violence. The structure of the novel heightens the tension, as each stop of the elevator brings a new challenge until the narrative arrives at its taut, ambiguous ending. There is considerable symbolism, including the 15 bullets in the gun and the way the elevator rules parallel street rules. Reynolds masterfully weaves in textured glimpses of the supporting characters. Throughout, readers get a vivid picture of Will and the people in his life, all trying to cope with the circumstances of their environment while expressing the love, uncertainty, and hope that all humans share.

This astonishing book will generate much needed discussion.