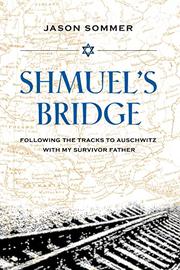 Following the Tracks to Auschwitz With My Survivor Father

A father-son journey through the land and memories of the Holocaust.

Sommer, the author of five poetry collections, recounts a 2001 visit to Eastern Europe with his Hungarian father, Jay, a Holocaust survivor. Raised in poverty, Jay was sent to a forced labor camp as the Nazis overtook his homeland. Eventually, he was able to escape the camp, evading capture until he joined a Soviet army unit toward the end of the war. The author arranged a trip following the rail lines that figured heavily in his father’s history as well as those of other family members who did not survive. Of special interest to Sommer was the search for a bridge where his uncle, Shmuel, had escaped the train to Auschwitz only to be killed by guards. The author provides an undeniably intriguing tale of travel and remembrance, filled with fascinating characters and places caught between the war-torn past and the post–Cold War future. However, the primary narrative focus is on the strained and highly unusual relationship between the author, who was raised during a time of relative peace and prosperity, and his father, aptly described as “an omnivore of terror” who “suffered the most thorough dissolutions of social order” and "had law and border shift around him, restricting his life, collecting him for forced labor, while narrowly avoiding what he feared most, the fate of almost all his family.” In exploring the purpose for his journey and this book, Sommer writes, “I would have liked my writing to have cleared a path between my father and me, so we could have had a fuller knowledge of each other.” Writing the book was obviously an act of catharsis for the author, who often brings up his own search for truth, connection, or some other personal need he feels but cannot easily put into words.

A worthwhile work of Holocaust remembrance, but readers must be prepared to journey with the son as well as the father.