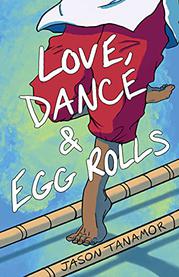 Jamie Santiago is devastated that, due to a lack of funding, this year’s Folk Festival will be the last one ever held.

At 16, Filipino American Jamie has been dancing in the local Folk Festival, which is sponsored by various Asian ethnic associations, since he was 6, and it is the one source of happiness for him. Sadly, shame over his heritage causes him to hide his love of Filipino dance from Walter and Dennis, his football-obsessed White best friends. In fact, he struggles to find common ground with Walter, particularly around the subjects of race and Jamie’s goth girl crush, Bethany. Jamie is the only non-White student at his school in Milwaukie, a small Oregon city near Portland, even though there must be a substantial enough community to create the local Filipino American association that his parents have been involved with for years. Unfortunately, this book lacks a clear plot; it reads more like a vehicle to describe Filipino culture, dishes, and mannerisms, all of which are presented in a way that explicitly explains them for a non-Filipino readership rather than having them emerge organically from the story and characterization. Tagalog words and expressions such as tsinelas and ay nako are woven throughout the text, making the choice to use the term egg rolls for lumpia, one of the most beloved and well-known Filipino foods, baffling. Though the book takes place sometime after the 2016 presidential election, the pop-culture references and slang feel dated.