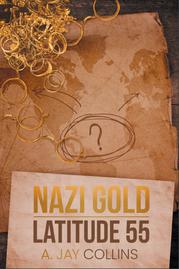 by A. Jay Collins

An offbeat operative embarks on a daring plan to recover a massive cache of gold stolen by Nazis and hidden by the Mafia in Collins’ historical thriller.

Adolf Hitler’s tyranny was partly bankrolled by art and gold stolen from the Nazis’ victims, which was worth as much as $120 billion. This novel tells a story in which the soon-to-be-defeated Nazis move that mountain of loot into storage—a complex operation that requires collaboration with Swiss and German banks, the Italian Mafia, and officials in the Vatican, the latter of which is portrayed as being in desperate need of funds. The Mafia commandeers the lion’s share of the booty, and gangster Meyer Lansky—who, in this novel, is a Naples-based Mafia crime boss—arranges to move the gold to a remote mine in Toodoggone, a locale situated in the inhospitable wilderness on the western coast of Canada. In a bid to secure its entry into the European Union, the Turkish government hires Matthew Black to find the treasure and return it to its rightful heirs. Matthew is a “seasoned professional saboteur,” employed by the Organization for the Reorganization of Business, a shadowy and powerful group that “redirects” world affairs when they go awry—a comic-book–style conceit that’s typical of Collins’ entertaining tendency toward cinematic grandiosity. Matthew is opposed by cartoonishly evil players, as well—Global Gold, a corporate front for the Mafia run by the ruthless Marino De la Hora, and Pope Germane himself. Over the course of this novel, the author constructs a tale that’s not very plausible, to be sure, but it is thrilling, and it provides readers with a fascinating tapestry of historical fact, rumor, and unsubstantiated legend. Indeed, the work maintains readers’ interest, in large part because Collins clearly has an impressive grasp of the real-life history that underpins it, which rescues it from feeling like mere fantastical contrivance. It’s also a delightfully action-packed novel, and even if one can’t entirely take it seriously, it remains consistently enjoyable.