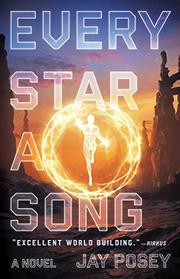 EVERY STAR A SONG

When the exiled Elyth is finally captured by the Hezra, she thinks she’s done for, but instead they make her a compelling offer in this second book of Posey’s Ascendance series.

Elyth has been on the run since the events of Every Sky a Grave (2020), and when she's finally caught, she's shocked to realize that one of her former friends from the Ascendance was working with the Hezra to hunt her down. Apparently the Ascendance and the Hezra have a problem, and not only have they agreed to work together to solve it, but they need Elyth’s help. Somehow, an entire planet has materialized out of nowhere. Not only that, but a team of experts including the Paragon herself, the great leader of Elyth’s former order, went to investigate the planet and were never heard from again. Elyth is to join a second team in order to find out what happened to that first crew and solve the mystery of the impossible planet. When they land on the surface, they find a deceptively normal landscape with hidden surprises. They notice that the planet itself seems to be changing around them, and it soon turns from simply strange to downright deadly. Posey tries hard for a lovably ragtag group dynamic here, but it doesn’t coalesce. Elyth’s attitudes toward different characters feel forced, as do the personalities of the other crew members. And while the plotting is better than in the previous novel, all the twists start to feel mechanical after the first few chapters end with a big reveal. The strange happenings on the seemingly haunted planet provide much better material, giving the book a delightfully spooky atmosphere that could have been further explored.

A fun setting but a forgettable book.