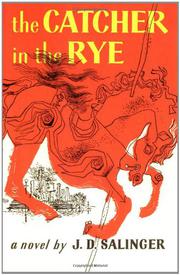 THE CATCHER IN THE RYE

A violent surfacing of adolescence (which has little in common with Tarkington's earlier, broadly comic, Seventeen) has a compulsive impact.

"Nobody big except me" is the dream world of Holden Caulfield and his first person story is down to the basic, drab English of the pre-collegiate. For Holden is now being bounced from fancy prep, and, after a vicious evening with hall- and roommates, heads for New York to try to keep his latest failure from his parents. He tries to have a wild evening (all he does is pay the check), is terrorized by the hotel elevator man and his on-call whore, has a date with a girl he likes—and hates, sees his 10 year old sister, Phoebe. He also visits a sympathetic English teacher after trying on a drunken session, and when he keeps his date with Phoebe, who turns up with her suitcase to join him on his flight, he heads home to a hospital siege. This is tender and true, and impossible, in its picture of the old hells of young boys, the lonesomeness and tentative attempts to be mature and secure, the awful block between youth and being grown-up, the fright and sickness that humans and their behavior cause the challenging, the dramatization of the big bang. It is a sorry little worm's view of the off-beat of adult pressure, of contemporary strictures and conformity, of sentiment….

A strict report, worthy of sympathy.