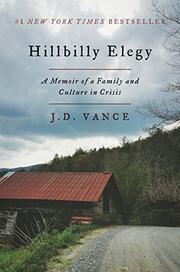 A Memoir of a Family and Culture in Crisis

A Yale Law School graduate’s account of his traumatic hillbilly childhood and the plight of America’s angry white working class.

“Americans call them hillbillies, rednecks, or white trash,” writes Vance, a biotech executive and National Review contributor. “I call them neighbors, friends, and family.” In this understated, engaging debut, the author reflects on his stormy journey from the coal-country Kentucky hollers of Appalachia to the declining Rust Belt to life among the Ivy League–educated elite. Born into a poor Scots-Irish family—with a pill-addicted mother and “revolving door of father figures”—Vance was raised in Ohio by his beloved and newly middle-class grandparents, hardworking believers in the American dream who married in their teens and never shook the trappings (abuse, addiction, and constant fighting and screaming) of their native Kentucky’s hillbilly culture. Mamaw, his grandmother, once set her husband on fire when he came home drunk; Papaw, a violent grouch, tossed a Christmas tree out the back door. In scenes at once harrowing and hilarious, we come to know these loud, rowdy gun-toters as the loyal and loving family whose encouragement helped the author endure “decades of chaos and heartbreak.” In the Marines and at Yale, Vance learned to make responsible adult choices and overcame the learned helplessness that characterizes many in the working class. Pointedly identifying the cynicism and willingness to blame others endemic among that class, he describes the complex malaise—involving sociology, psychology, community, culture, and faith—that has left so many bereft of connections and social support and unable to find high-quality work. The solution, he believes, is not government action but in people asking themselves “what we can do to make things better.” Declaring that he survived with the help of caring family and friends, he writes, “I am one lucky son of a bitch.”

An unusually timely and deeply affecting view of a social class whose health and economic problems are making headlines in this election year.