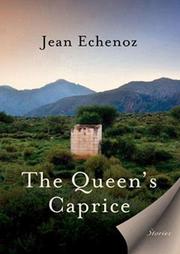 Seven odd little vignettes that add up to a book of beauty.

French author Echenoz has visited American readers several times previously with wry novels such as the recent revision of I’m Gone (2014). This collection of stories is something entirely different. The translator, Coverdale, describes the tales as récits, but Echenoz’s own description is preferable—“little literary objects.” In some of the stories, nothing happens other than a literary description of the landscape for 360 degrees around the writer’s chair (“The Queen’s Caprice”) or a series of walks around a decaying French town that will not see better days again (“Three Sandwiches at Le Bourget”). The collection proceeds with Echenoz’s distinctive voice, and Coverdale appends various endnotes to explain some of the arcane facts he freely inserts into his tales. One of the gems, “Nelson,” is a fair representation of what's at work here. Adm. Nelson sits down to dinner, certainly the center of attention and affection. The admiral’s afflictions and injuries are obliquely unveiled over the course of the evening. When given a newspaper covering the Treaty of Amiens, he “places the page to his left, at an angle, and seems able to read it only in this manner, sideways,” having been blinded in his right eye during the bombardment of Calvi. When Nelson rises from the table between courses, leaving the other guests behind, with quirky elegance Echenoz reveals him taking acorns from his pocket, “retimbering” at the edge of the woods outside. “He has set his heart on planting trees whose trunks will serve to build the future royal fleet.” There is an echo of García Márquez in these simple yet enigmatic pages.