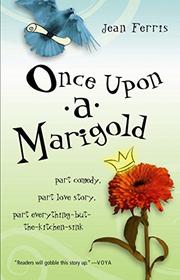 ONCE UPON A MARIGOLD

From the Marigold Trilogy series, volume 1

Cold indeed is the heart not made warm by this bubbly fairy-tale romance. Raised by a kindly forest troll, Christian knows little of the world beyond what he can see through his telescope, but gazing upon a nearby castle, he falls head over heels for Princess Marigold. What chance has he, though, as a (supposed) commoner? When at last he nerves himself to send her a message via carrier pigeon, she answers and the courtship is on—via “p-mail” at first, then, after he lands a job as a castle servant, face to face. Setting numerous fairy-tale conventions just a bit askew, Ferris (Of Sound Mind, 2001, etc.) surrounds her two smart, immensely likable teenagers, who are obviously made for each other, with rival suitors, hyperactive dogs, surprising allies, and strong adversaries. The most notable among the last is devious, domineering Queen Olympia, intent on forcing Marigold into marriage with a penniless, but noble, cipher. The author gets her commonsensical couple to “I Do” through brisk palace intrigue, life-threatening situations, riotous feasting, and general chaos; Queen Olympia gets suitable comeuppance, and the festivities are capped by the required revelation that Christian is actually heir to the throne of neighboring Zandelphia. Fans of Gail Carson Levine’s Princess Tales will be in familiar territory here, as well as seventh heaven. (Fiction. 11-13)